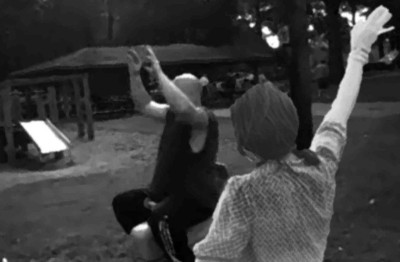 Our family tries to fight off this terror of agism with a simple method. We celebrate everybody’s birthdays every month, and instead of an yearly, linear accumulation of age, we each decide on what age to be next by lot. The result of this month was somewhat interesting, since the daughter and the father got each other’s age. So for a month, the ten year old daughter performed as a forty year old, and the forty year old father performed as a ten year old. Note that the father-daughter relationship remained unchanged. Our focus is only in shifting the surface behavior (which again, mostly concerns the manners of acting, thinking and talking). This age exchange was performed continuously for a month, under different situations: solely between ourselves (intimate and intense), before the rest of the family (hilarious and disturbing), and in public (weird and embarrassing). This description was written by the ten year old performing as the forty.