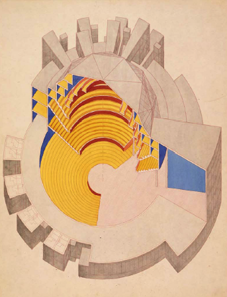 1. Theatre frames an event in order to detach a time-space from the given, pre-established one that surrounds the spectator. It thereby attempts to create that utopic freedom, pertaining to ‘fictions’ in general, to be uninvolved (or involved differently) in an already conglomerated situation, addressed in comparison as ‘reality.’

2. This aim of theatre can, and fundamentally speaking, must, be pursued without adhering to the physical conditions of a given space. Therefore, against the conglomerate of theatre-as-genre and theatre-as-building-type (whose ‘reality’ is inscribed in the metonymic sharing of a common name), the problematics of the genre can and should be detached from that of the building-type.

3. In the same way, theatre can and should be detached from a naive conception of ‘tomorrow,’ if what is addressed by that term is merely an extension of the given realities of a conglomerated ‘today.’ Theatre resists the present in the present.

4. For instance: the prevalence of cell phones that every theatre-goer today brings into the theatre suggests an alternative to the primacy of architecture. By connecting its user to another space and time, cell phones disrupt and relativize the framing ability of theatre. In other words, this portable media smuggles another theatre, cellular and mobile, into the physical-psychological unity of theatre, relativizing the latter’s singular reality. That is why they must be ostracized at all costs: “PLEASE SILENCE YOUR CELL PHONES ONCE IN THE THEATRE.”

5. To generalize: any physical-psychological unity of any given space-time (i.e. ‘reality’) is constructed theatrically, and is thus vulnerable to the intrusion of other theatrical media.

6. Detachment from a seemingly conglomerated unity/reality has precisely been the subject matter of theatre since antiquity. Drama is always triggered and conditioned by the localized nature of each character (partial knowledge and mutual ignorance) that cannot be unified into a common reality (it is as if oedipus was on the phone all the time).

7. The localized ignorances on stage, however, are overviewed by the spectators (who thus play the role of gods). But their divine perspective is supported by two meta-media that enwrap the divergence of local realities: the stage and the text. The imagined unity of theatre-as-building-type and that of theatre-as-literary-form provides an objective correlative (spatial as well as temporal——since buildings have walls and texts always reach an end) to a unified ‘reality,’ to which the spectator/reader can safely return.

8. The very conception of ‘spectators in general’ is fictional. For each audience member, like each dramatis persona on stage, is always localized and partially ignorant.

9. Theatrical realism lies in the ‘fictional’ framing of the dismantlement of a given conglomerated ‘reality.’ So what is necessary is to dismantle the very split between the unity of spectators and the partiality of the dramatis personae. For what is fictional is the division between fiction and reality, and what is real is the possibility of rearranging this division. We thus fight one theatre with another.

10. Consider the theatrical realities of an exhibition which attempts to frame various localized objects and information into a conglomerate space-time unity.

11. The act of reading serves to detach the reader from a given space-time, as well as to conglomerate physically disparate spaces and times. Long before cell phones, books had already enabled a cellular and mobile theater. That is why theatre must be darkened; since if enough light is provided, any spectator may be absorbed into the frame of the text and be detached from his or her theatrical surroundings… as you have been doing for some time now.